AR in the Transportation and Logistics Sector: Part 2

This is the second in a five-part series covering the impact of Augmented Reality on the transportation and logistics industry.

As we established in the first part of our new five-part series on Augmented Reality in the Transportation and Logistics sector, this is an industry under-going a great deal of change. A mix of factors are all propelling and enabling change in one form or another. They include:

The recent report by strategy and analysis firm PwC that we referenced in Part 1 of this series does a great job of graphically representing many of these factors. 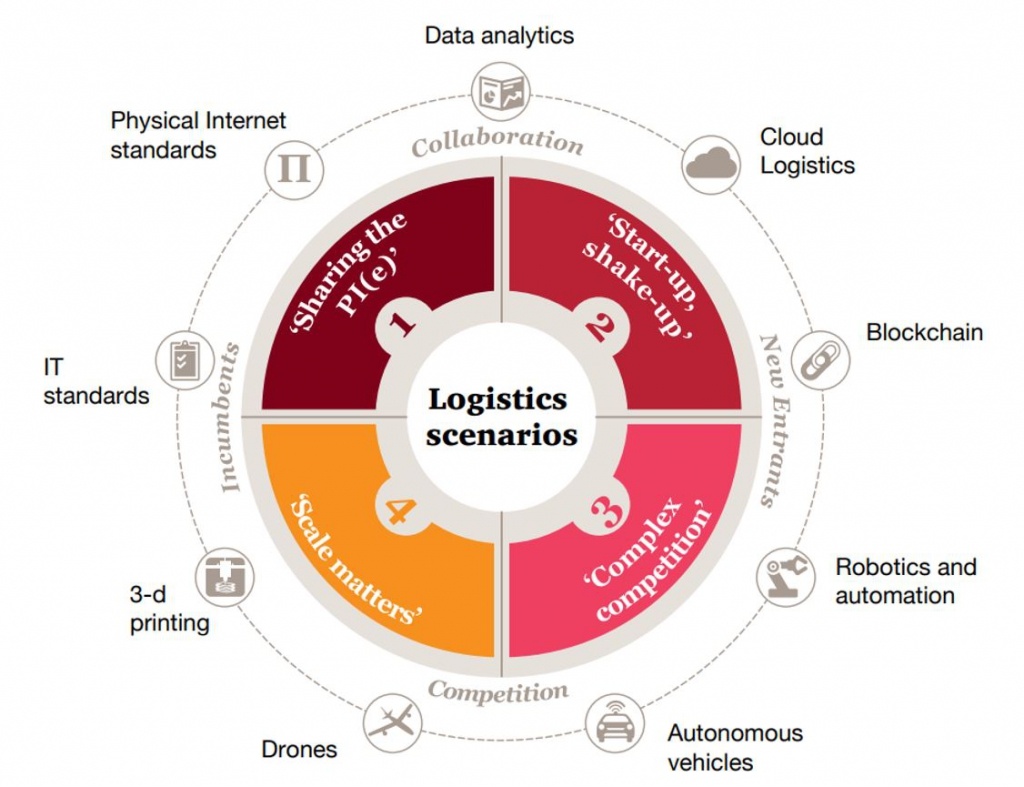 The series of concentric circles on this PwC chart shows how these trends relate to one another. PwC sees the sector in terms of four central scenarios: one about sharing the “physical internet”, another about the growing number of new start-up players disrupting the overall transportation and logistics market, a third relating to the complexity of the new competitive landscape and the final scenario relating to the question of how larger market players attempt to achieve greater scale by acquiring smaller (and often newer players).

Surrounding those components are a variety of technologies and standards that play in each of these scenarios. For example, blockchain technology (which allows for verifiable, end-to-end tracking of goods from source to delivery) is both disruptive and a space in which many start-ups are playing. Both robotics/automation and autonomous vehicle technologies change the complexity of the logistics and transportation industry – and represent potential new competitors to parts of it.

Meanwhile, 3-D printing can offer a way to provide fast, local and custom manufacturing of some goods – and allow certain kinds of industrial enterprises to scale in a way that might otherwise be limited by the logistics and transportation options available to them. Drones can also act as a supplement to traditional delivery options.

There’s a lot more to dig into in each one of those trends, but before doing so, it may help to take a closer look at one key element of the changing transportation and logistics landscape: the trucking industry.

According to Duke Drinkard, retired vice president of maintenance at Southeastern Freight Line and current president of the 21st Century Driver and Truck Alliance, technological change is touching every aspect of the transportation and logistics sector – with trucking being no exception. 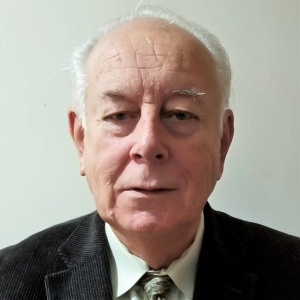 Mr. Drinkard, who also served two terms as a member of the American Transportation Research Institute’s research advisory committee, says there are many examples of this – starting with the much-anticipated arrival of autonomously-driven heavy-duty trucks.

Leading global truck makers such as Volvo Trucks Global and PACCAR, (which manufactures the Kenworth, Peterbilt and DAF lines of trucks) have automated driving work underway.

In addition, many start-ups (such as TuSimple and Embark Technology) are working on autonomous trucks. Technology companies such as Uber and NVIDIA are also looking to have an impact in this area.

Mr. Drinkard also points out that there is a significant shortage of long haul truck drivers right now – a situation only made more urgent by the huge, e-commerce-driven increases in the volume of goods being shipped. "It's really an interesting time," he said. "The advent of technologies for autonomous vehicles is now more of a discussion for everybody. Driver (shortage) issues are bringing that into play."

He suggests, however, that governments will need to be a lot more effective in repairing existing infrastructure – and building out the new infrastructure (including charging stations for electric trucks) to properly support long haul autonomous trucking.

But Drinkard and other leading voices in the trucking industry agree that this won’t happen overnight – and that there will be a lengthy period of change in the industry before the use of autonomous trucks will be commonplace.

For example, Göran Nyberg, President of Volvo Trucks North America, said in February of 2018 that change on this front will be gradual. “At some point in the future, self-driving Volvo trucks will be a reality on our roads in North America and part of our society, probably starting in confined or private areas under controlled conditions,” he explained. “We continue preparing for deployment of trucks with higher levels of advanced driver assistance systems, but exact timing depends on many things, namely regulations, infrastructure and safety standards, and market demand.”

In the meantime, Mr. Drinkard says that trucking companies need to find solutions to both the pressing driver shortages – as well as the business challenges created by lengthy and expensive downtime when long haul trucks need to be serviced.

He says that demand for long haul trucking services - and the cost and complexity of both the trucks themselves and the digital equipment needed to diagnose and repair them – makes it tough for repair operators to keep up. In addition, the industry is also facing shortages of skilled and experienced long-haul trucking repair staff as experienced baby-boomer aged mechanics retire – and the industry struggles to hire people to replace them.

Mr. Drinkard spoke about the increasing amount of downtime faced by trucking industry -  he said that it has caused a lot of companies to see a rise from having to maintain a 5% contingency allowance (in terms of extra truck capacity to fill in when other trucks in a fleet are down) to needing a 15% contingency of extra trucks.

He said a lot of this was driven by the rising cost of diagnostic tools in today's increasingly complex trucks - meaning that only the service departments of major dealerships can afford to have the tools. As a result, he says those shops charge not only for hookup to diagnose repair and maintenance issues, but also charge for the computer time to do the diagnostics and then for the labor of the specialist that is reading and implementing the results of the diagnosis.

Demand is apparently so high for these expensive services that a truck can be held up from 3, 4 or 5 days before it's even hooked up to the diagnosis equipment. Then the repairs have to be carried out, based on the results of the diagnosis. In the meantime, the trucking company that owns the truck that's in the shop will have had to bring in another truck to pick up the load that was being hauled by the original truck (with all the costs inherent in doing so). Anything which can reduce that downtime is of huge interest.

AR offers part of the solution

As a result, the industry is turning to technology – and notably Augmented Reality (AR) - to help meet these challenges.

Matt Johnston, the Director of Consumer Experience at Florida-based Design Interactive, Inc., says that his company (a partner of Atheer) is seeing huge demand from the trucking sector for AR solutions that can help reduce truck downtime.

“Downtime keeps trucks off the road,” said.Mr. Johnston. “If a truck is off the road, the company (or person) that owns it does not make money and neither does the driver - who is a big stakeholder in this (especially when the driver is also the owner operator).  Asset utilization is the key performance indicator in trucking.”

Augmented Reality technology helps meet the trucking industry’s downtime challenge in two ways. Firstly, it provides a way of using smart glasses to conduct “see what I see” video conferencing with remote experts who can help less-experienced mechanics at a dealership’s repair facility to understand the nature of a given technical problem, assist with remote diagnosis and walk the local mechanic through the steps needed to make the repair.

Secondly, the local mechanic can use their smart glasses (along specialized software such as Design Interactive’s AUGMENTOR running on Microsoft HoloLens) to systematically record the steps they take to make a given truck repair – and then make that set of instructions available for editing and sharing with other mechanics in the company (using a version of AUGMENTOR that incorporates Atheer’s AiR Enterprise).

Those are just two of the many benefits that an AR solution can provide to the maintenance and repair side of the trucking industry. Johnston also adds that he is seeing demand for this kind of solution being driven by several hiring-related trends in the industry:

He also points to recent government decisions about banning certain types of vehicles from large cities – such as the recent news that German courts have upheld the right of German cities to ban diesel cars (and the eventual potential impact on diesel trucks). “What is a fleet to do if they can’t enter the city?,” Johnston asks. “And how far behind will America or North America be?”

He also observed that the demand to reduce diesel use will drive more trucking companies to look at alternative power vehicles – some of which were exhibitors at the March 2018 TMC 2018 annual exhibition and conference in Atlanta, Georgia. He suggested that this kind of change is causing all kinds of companies to rethink the businesses they are really in – and where they add value. “Ford is a mobility company, not a car company,” he said. “Who would have said that 5 years ago?”

Next week, in the third of our five-part series covering the impact of Augmented Reality on the transportation and logistics industry, we’ll take a look at how logistics and transportation companies can go about assessing their needs for an AR solution (and calculating the Return on Investment it could provide).